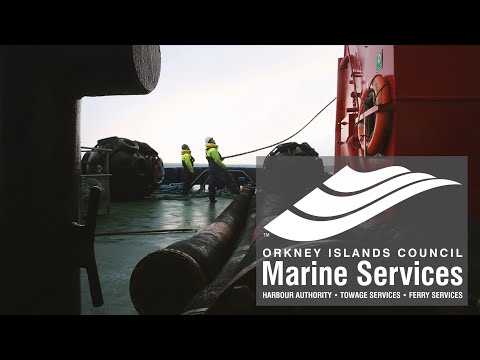 Up Close and Personal

Meet members of the management team and staff who, through their professionalism, dedication and passion, manage and operate one of the UK’s most diverse and successful Harbour operations.

Born in South Wales, bred in the Peak District and coalfields of Staffordshire, Jim has a long affiliation with Orkney, spending family holidays in and around Birsay.

Joining the Royal Navy from school in ’87 as a Seaman Officer with the desire to become a Naval Aviator, he over a varied 30 year career became a Specialist Navigator (marine Pilot) and Master Mariner (warship). Sailing all 7 seas and visiting all the continents with the notable exception of Australia, Jim has travelled the world on a variety of naval vessels, from the smallest mine hunter to the largest aircraft carrier. He has commanded both ships and squadrons of vessels, held instructional and strategic posts and worked with an array of international organisations, navies and individuals.

Made a Fellow of the Royal Institute of Navigation for his work on the navigation of Small Craft, he completed his career in the Ministry of Defence, leaving the service in 2017.

On leaving he continued his maritime career, working first at Peel Ports Great Yarmouth as the Head of Marine Service and Operations and then for OSI Maritime Limited as a Business Development Director.

Jim has returned to the islands he loves and looks forward to providing the strategic direction and leadership to secure a strong and prosperous maritime future for Orkney.

David joined Orkney Islands Council as Ferry Services Manager in 2005 and was involved in the formation of the Marine Services department in 2009 becoming Head of Marine Services (Support).

Prior to this David worked at Portsmouth and Shetland councils in marine and harbour roles and served at sea on oil tankers. Currently the Deputy Harbour Master, Strategy and Support, he is lead for the Orkney Harbours Masterplan that will see a transformation of the Harbour Authority facilities including the construction of a new facility in Scapa Flow that will support the ScotWind round of leasing.

David is also responsible for the in-house Marine Environment Unit, Port Safety and Pollution and strategic projects such as the new towage vessels that joined the fleet in 2020.

Richard joined the merchant navy out of school, serving as a cadet on container ships worldwide. After qualifying he worked on a wide variety of vessels including; Bulk Carriers, Marine Protection vessels, offshore vessel and latterly local Ferries.

He joined the department in November 2019 and is responsible for the day to day operations of the 29 piers and harbours within the Orkney ports estate.

She joined Orkney Islands Council in March 1998 firstly working in Technical Services then to Finance, Customer Services and then part of the Accountancy Team where she gained her MAAT in Accountancy.

Paul joined the team at Scapa in November 2019 and is responsible for the development of the core business incomes for Marine Services as Business Development Manager.

Paul served in the Royal Navy, worked in Siberia and Nigeria in the oil sector and spent a lot of time sailing around the worlds oceans doing geotechnical surveys.

Paul is a fellow of the Institute of Chartered Shipbrokers (FICS) having passed his professional exams in 2018.

Douglas’s marine career started over 25 years ago in the white fish and pelagic fishing industry. In 1997 he moved to the offshore industry working on oil and gas support vessels in the North Sea. Douglas joined Orkney Towage Company Limited in 2002 latterly sailing as Chief Officer and then came ashore in 2017 as Port Safety and Counter Pollution Manager with Marine Services.

George is the Port Safety Manager and responsible for the Safety Management System of the Port under the principles of the Port Marine Safety Code, oil spill contingency and waste management. He came to Orkney from Peterhead where he was Senior Assistant Harbourmaster. Prior to this he worked as a marine consultant responsible for vessel assurance, rig moves and audits around the world. He spent 14 years at sea as a master onboard anchor handlers and PSV’s.

David has over 10 years’ service with Orkney Islands Council and has accumulated over 30 years’ experience in ship operations and management, and is a fully qualified Chief Engineer and registered Incorporated Engineer.

He joined the management team at the Harbour Authority in 2010, and prior to this he was the Technical Superintendent with Orkney Ferries Ltd. David is responsible for the maintenance and availability of all of Orkney Marine Services Vessels, VTS, Linkspans and Harbour infrastructure. He is part of the operational management teams for the towage, ferries and harbour operations.

Jenni has a BSc (Hons) degree in Zoology from University of Bristol, an MSc in Aquatic Ecosystems Management from Edinburgh Napier University and a PhD in Marine Biology from Heriot-Watt University.

Laura commenced employment at Orkney Islands Council after graduating in 2003.

After initially focusing on school transport within the education service, Laura took up the role of Transport Planner in 2009 and subsequently, Transportation Manager in 2013. Laura has a BA in Business Administration, Diploma in Management, MSc in Transport Studies and is a Member of the Chartered Institute of Highways and Transportation.

Kane has had a passion for aviation from an early age and holds a MSc in Airport Planning and Management from Cranfield University.

He previously spent 5 years at Etihad Airways in the UAE and 15 years working in Tokyo and Fukushima, Japan.

In his free time, he is an avid reader of non-fiction books and likes to travel whenever the opportunity arises.